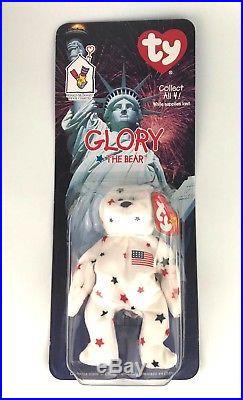 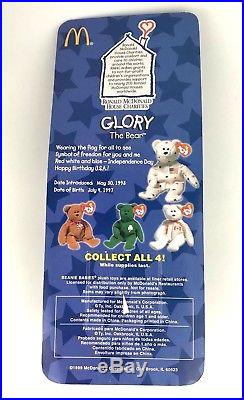 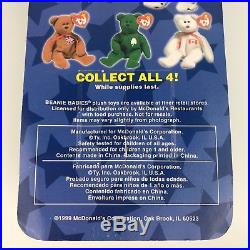 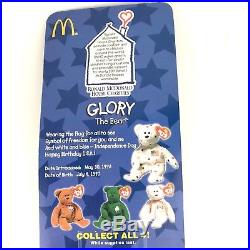 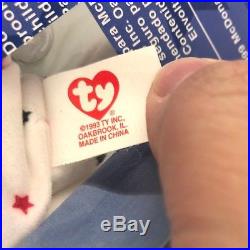 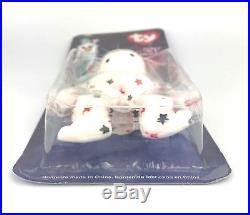 Glory The Bear-1997 McDonald’s Ty Beanie Baby With Rare Errors 1993 OakBrook. Don’t miss out on this rare and cute bear. Was born July 4,1997. Her poem reads: Wearing the flag for all to see. Symbol of freedom for you and me. Red white and blue – Independence Day. This white bear has black button eyes and a black nose, and proudly wears a USA flag on her chest. This bear is a retired Teenie Beanie Baby with TAG ERRORS and date errors. Tush tag errors – the box states that her birthday is. But her tag says 1993 and she was made in Oak Brook, Illinois, but her tag reads OakBrook (without the space). Was introduced May 30, 1998. Glory was exclusively a Ronald McDonald House Charity bear. She belongs to 1 of 4 of the International Bears of 1996. She is 1 in 4,000 manufactured!! She has never been played with or taken out of his box. There are two small flaps on the back of the box I opened one strictly to take the photo of the tush tag. The edges of the box have some wear and the plastic is slightly dented simply due to age (21 years old) but Glory herself is MINT condition, This is a Teenie Original Beanie. The item “Glory The Bear 1997 McDonald’s Ty Beanie Baby With Rare Errors 1993 OakBrook” is in sale since Thursday, August 16, 2018. This item is in the category “Toys & Hobbies\Beanbag Plush\Ty\Beanie Babies-Original\Retired”. The seller is “dashvintage18″ and is located in Miami, Florida. This item can be shipped to United States, Canada, United Kingdom, Denmark, Romania, Slovakia, Bulgaria, Czech republic, Finland, Hungary, Latvia, Lithuania, Malta, Estonia, Australia, Greece, Portugal, Cyprus, Slovenia, Japan, China, Sweden, South Korea, Indonesia, Taiwan, South africa, Thailand, Belgium, France, Hong Kong, Ireland, Netherlands, Poland, Spain, Italy, Germany, Austria, Israel, Mexico, New Zealand, Singapore, Switzerland, Norway, Saudi arabia, Ukraine, United arab emirates, Qatar, Kuwait, Bahrain, Croatia, Malaysia, Brazil, Colombia, Panama, Jamaica.